Everything You Should Know About Restaurant Parklets

What started as a cool little idea by John Bela in San Francisco has boomed around the United States and even among cities internationally.

Parklets have grown in popularity in the last year, more so out of necessity rather than the appeal of beautification of a city. The COVID-19 pandemic caused cities to react quickly to add socially distanced dining to urban restaurants.

What is a Restaurant Parklet?

Restaurant parklets are seating areas on the sidewalk or street that often feature tables outside a business’s establishment and are becoming increasingly popular in cities worldwide. They provide restaurants the opportunity to create an inviting space for people to enjoy their meals on the street, while also beautifying the surrounding landscape. Restaurant parklets typically feature seating, tables, shade, and greenery like planters and trees. With restaurant parklets, diners can appreciate an outdoor environment while being shielded from traffic and noise pollution.

A New Name Surfaces for Parklets

Parklets started in San Francisco but have been popping up in just about every major city, such as New York, Chicago, Baltimore, and Seattle. And they have become so popular the concept has grown overseas, like London and Australia.

In Tampa and Jersey City, N.J. parklets are now dubbed as “streateries.” Perhaps it’s a better name when attached to a local restaurant.

Tampa waived fees and city permits associated with sidewalk dining. The city even removed parking meters at the city’s expense to allow restaurants to build in an area along the street.

And the timetable in which Tampa created the streateries? The conceptualized idea began on a Friday and on the following Monday; the city implemented it.

For a restaurant to add a parklet or streatery, the owner needs to look into rallying the city to create a parklet ordinance. Many municipalities’ ordinances never had parklets in mind, so there probably is not any kind of ordinance on the books.

Ordinances would include permitting, design requirements (which should have some portability in case the parklets need to be dismantled), hours of operation, liability, and insurance.

But most times, city officials look at parklets to help restaurants during the pandemic as a way to show their support for walkable environments. 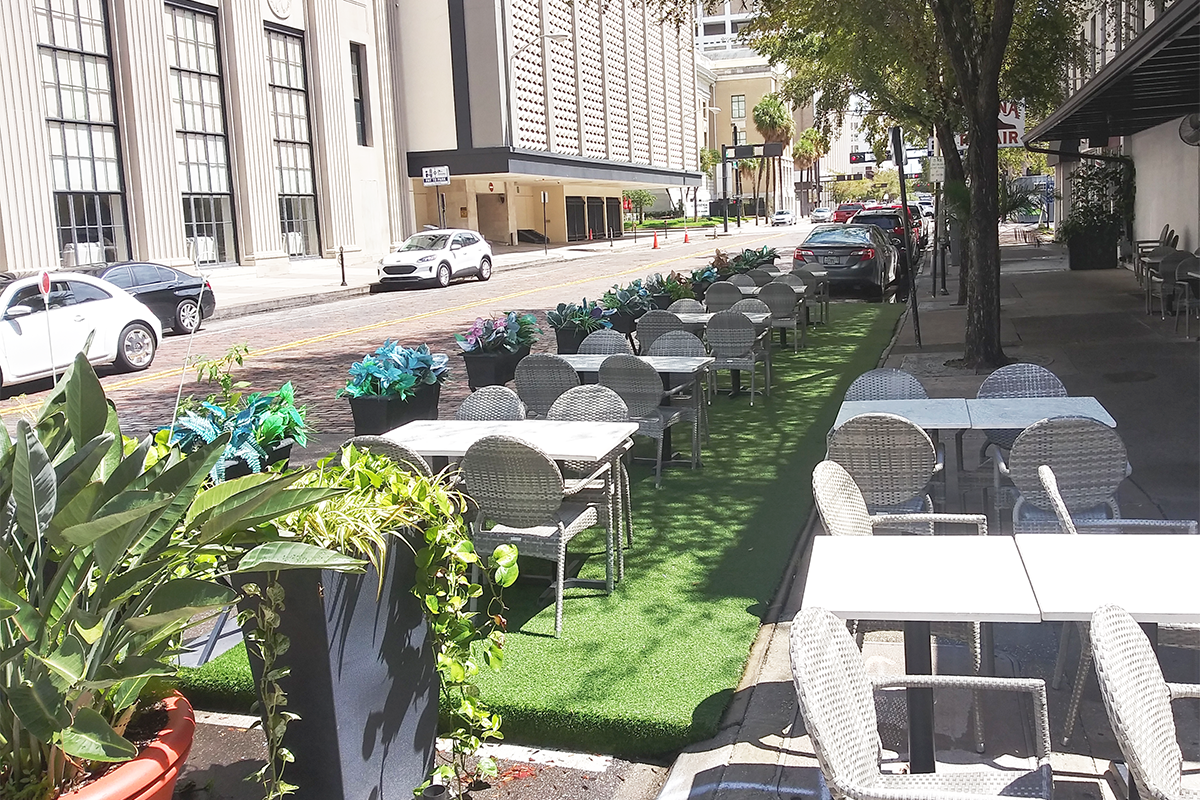 How Parklets are Built

You own a restaurant and your city has now approved an ordinance to add parklets. It’s perfect since your establishment has three parking spaces in the front.

Parklet design guidelines and compliance within the ordinance needs to be examined by you. Most cities approving the parklet have certain criteria that need to be met.

And depending on where your restaurant is located, you need to build your parklet and make it for a pleasant experience with an attractive atmosphere and year-round capabilities.

In New York City, the city said restaurants can institute a parklet program but couldn’t make it a totally enclosed area, since that would revert to indoor dining.

However, a fantastic statistic that came out of New York restaurants and COVID is the fact that of the 24,000 restaurants in the city, over 10,000 added either parklets or some sort of outdoor dining.

Your Restaurant and Parklet Can Change Equally

The more attractive you make your parklet, the more pedestrians will want to sit down and dine. But obviously, you certainly need good food to go with it.

With limited seating, especially with your restaurant completely shut down inside, your takeout menu and your parklet menu may have to be different. And you need to be versatile. With limited customers dining outside, you may have to alter your menu based on consumer preferences.

If customers know your restaurant for its food and its cocktails, then keep in mind different ways to change and optimize your bar menu as well. Create special menu items and cocktails specifically for your outdoor guests.

Obviously, one way to keep your menu fresh is to change with the seasons, summer, Christmas, whatever you choose.

The parklet can change easily. Since it’s constructed as a temporary structure, you can change the planters with the seasons. Decorate for summer, with lights and a good roof to stop the rain, for fall, take the roof down for drier weather, all the way to spring when it warms up again.

If you’re wondering about changing your parklet all the way until spring of 2022 by thinking “are we still going to be under COVID restrictions?” It’s a possibility, but either way, a simple deck or patio can increase revenue by up to 30%. Even more, if it’s up year-round.

There are movements in some cities that claiming the parklets are a pleasant touch to urban revitalization and will just be an extra dining option for customers.

As cities continue to allow for parklets or streateries, more restaurants are considering adding them, especially in a post-pandemic world where it can be a great permanent fixture to their establishment.

Depending on the city, permitting usually costs around $1,000 and also, depending on the design of the project, construction of a parklet cost can be anywhere from $15,000 to $50,000. The National Association of City Transportation Officials (NACTO) has administered a handbook for creating parklets here.

Parklets are a growing trend bordering on what could be a permanent fixture in many cities and even smaller towns.

As a restaurant owner, parklets are a valuable resource since they not only extend the square footage and range of the establishment, but will provide a source of revenue and better visibility for foot and vehicle traffic.